The roughly 7,000-acre ranch that the two of us own and operate by ourselves, is a part of who we are. We love to see the land improve over the years with hard work and utilizing the cattle to restore the range. We feel very privileged to be able to make a living here and we strive to improve the land to its highest potential .

To achieve our goal, we manage the ranch holistically. Since we bought and moved on to this ranch in 2004, we have been working hard to strengthen the ecological condition of the ranch, restoring the watersheds and removing infestation of invasive species. 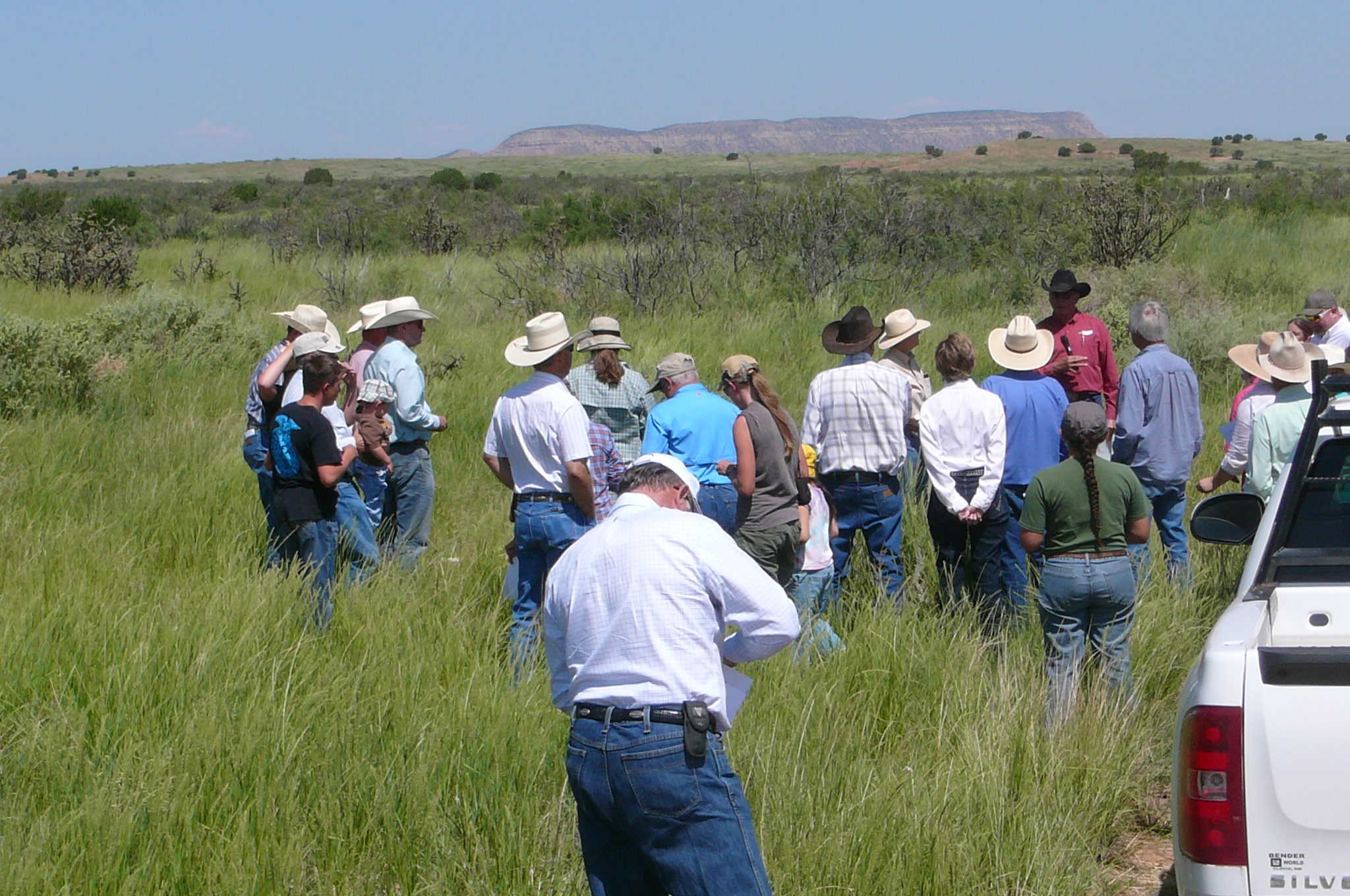 Ranching in the arid south-west presents its challenges, the main one being the lack of water availability.  Our wells are weak and produce marginal amounts of water. In order to provide sufficient water throughout the ranch, we had to install necessary infrastructure; many miles of buried water pipelines distribute the water from several wells to numerous 10,000 to 30,000 gallon capacity water storage tanks and to drinking troughs. The water availability benefits both our livestock as well as the wildlife that co-exist with us on the ranch (antelope, deer, turkey, road runners, coyotes, bobcats, occasional mountain lion and elk, and many more).

The removal of invasive species such as water-hogging mesquite and juniper/cedar, in combination with the rotational grazing planning, has show that the static water level in our wells is increasing as the grasses grow back and allow rain water to infiltrate into the ground instead of running off. 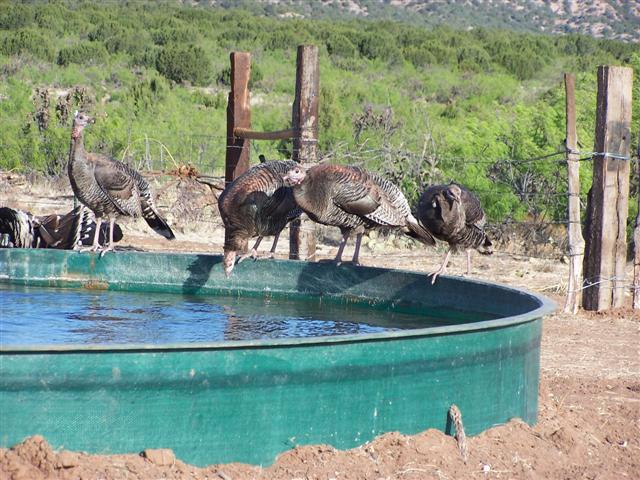 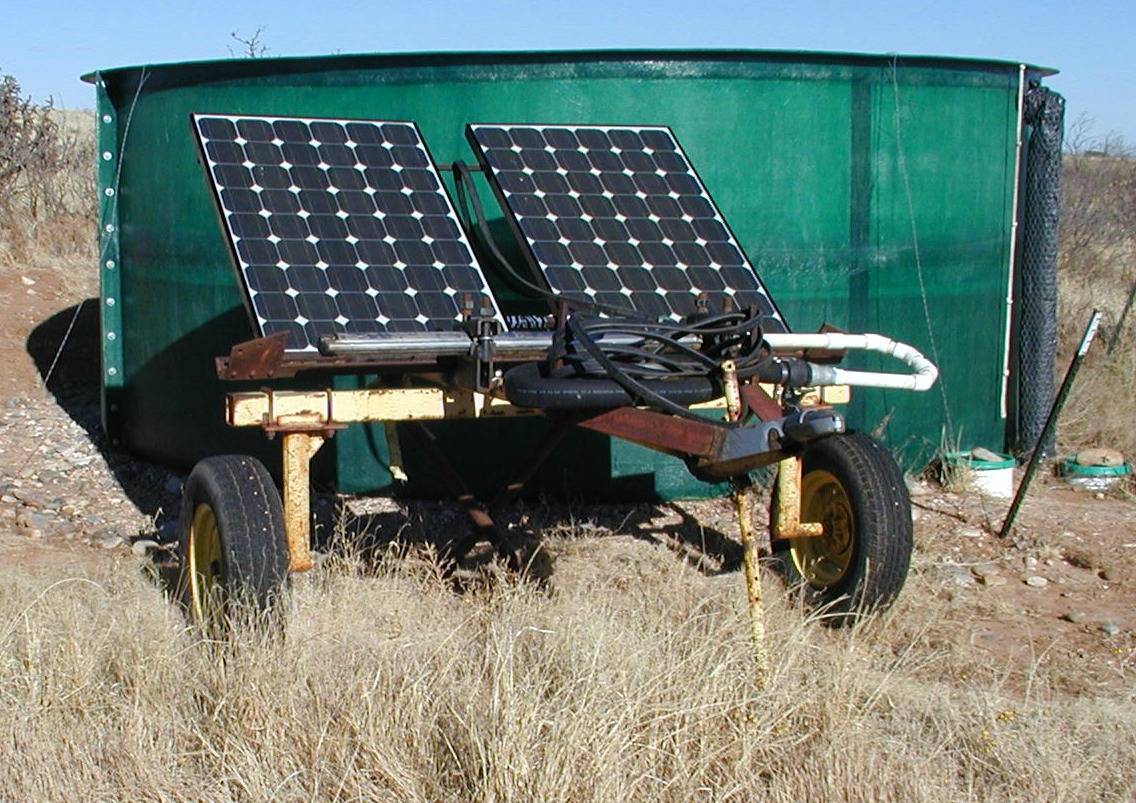 When we purchased this ranch and move here in 2004, we immediately started building electric fences and develop a water distribution system. Over the years we have created 25 pastures and an elaborate water distribution system which makes water available to the herd of cattle anywhere, anytime. This allows us to intensively rotate the one large herd through the whole ranch, grazing each pasture for an average of 5 days only, after which the herd moves on to the next pasture. The herd does not re-graze the pasture for 130 days, which allows grasses to grow strong roots and the most desirable species to develop while not constantly being grazed.

The hoof action of a large herd of cattle in a relatively small pasture, for a very short time, will break up the soil and enable rainfall to penetrate the soil, thus preventing run-off. Their hoof action incorporate organic matter into the soil, thus naturally fertilizing it. The grazing system mimics the large herds of bison that once roamed the West in constant movement and not returning to previously grazed ares for a long time.

Grass plants can grow a strong root system, and will survive droughts better than constantly grazed plants that have a weakened root system. They will recover and regrow at a much faster rate once the rains return after a dry period or drought.

Another advantage of grazing all the cattle in one large herd, rather than having them scattered throughout a ranch in smaller bunches, is the predatory defense system of a large herd; at times when a mountain lion has visited our ranch, we have found that the large herd stay close together with their smaller calves protected in the center, while a few cattle graze the perimeters of the herd. A large group of horned cows like ours (Longhorn and Corriente cows) which always graze in close proximity of each other, intimidates predators such as coyotes who otherwise like to prey on isolated cows giving birth, or newborn calves sleeping in the grass far away from the herd. 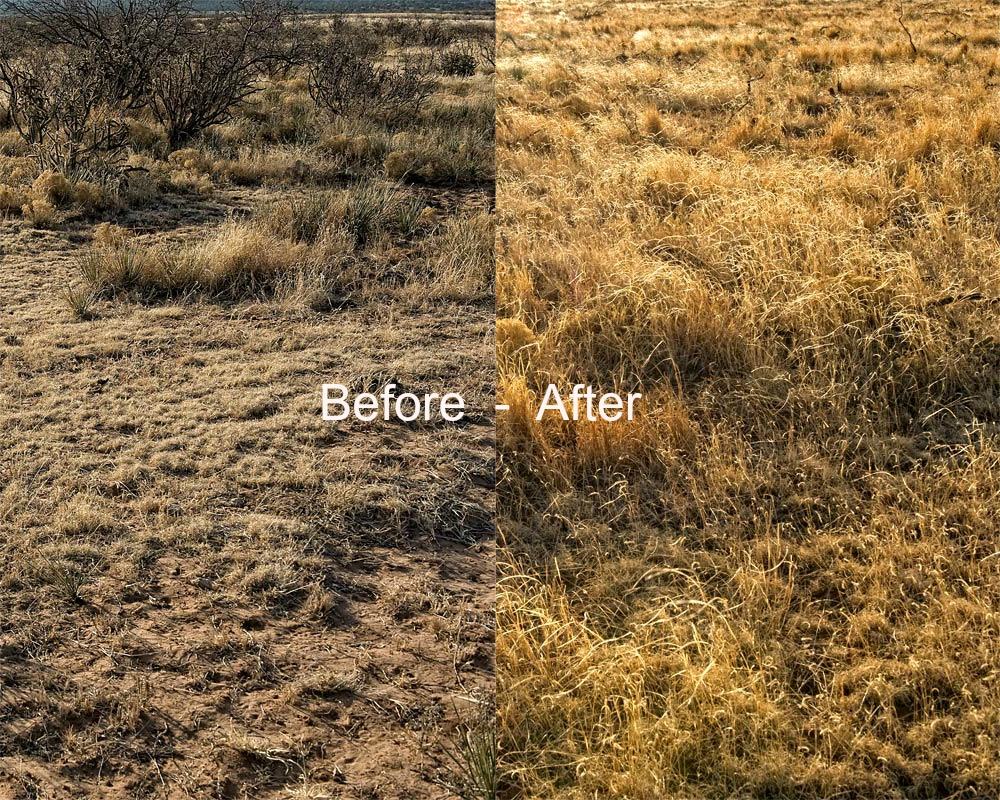 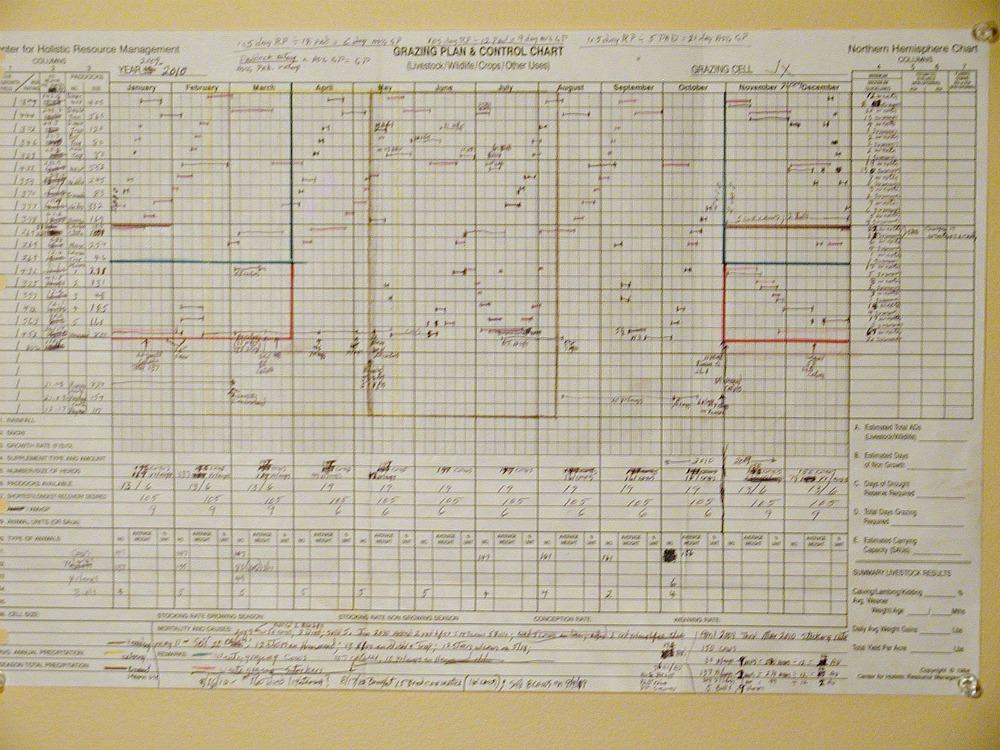 Holistic Management International, Southwest Grass-fed Livestock Alliance, Quivira Coalition and other groups have conducted tours on our ranch for educational purposes, and to show hands-on how to achieve successful range restoration in the arid south-west. We continue to open our gate to help the public gain understanding how cattle can help restore degraded range lands into healthy productive lands.

Tom is a frequent speaker at State and National events, on subjects such as “drought management”, “range restoration” and other land related issues. Together we have been privileged to receive several awards such as: 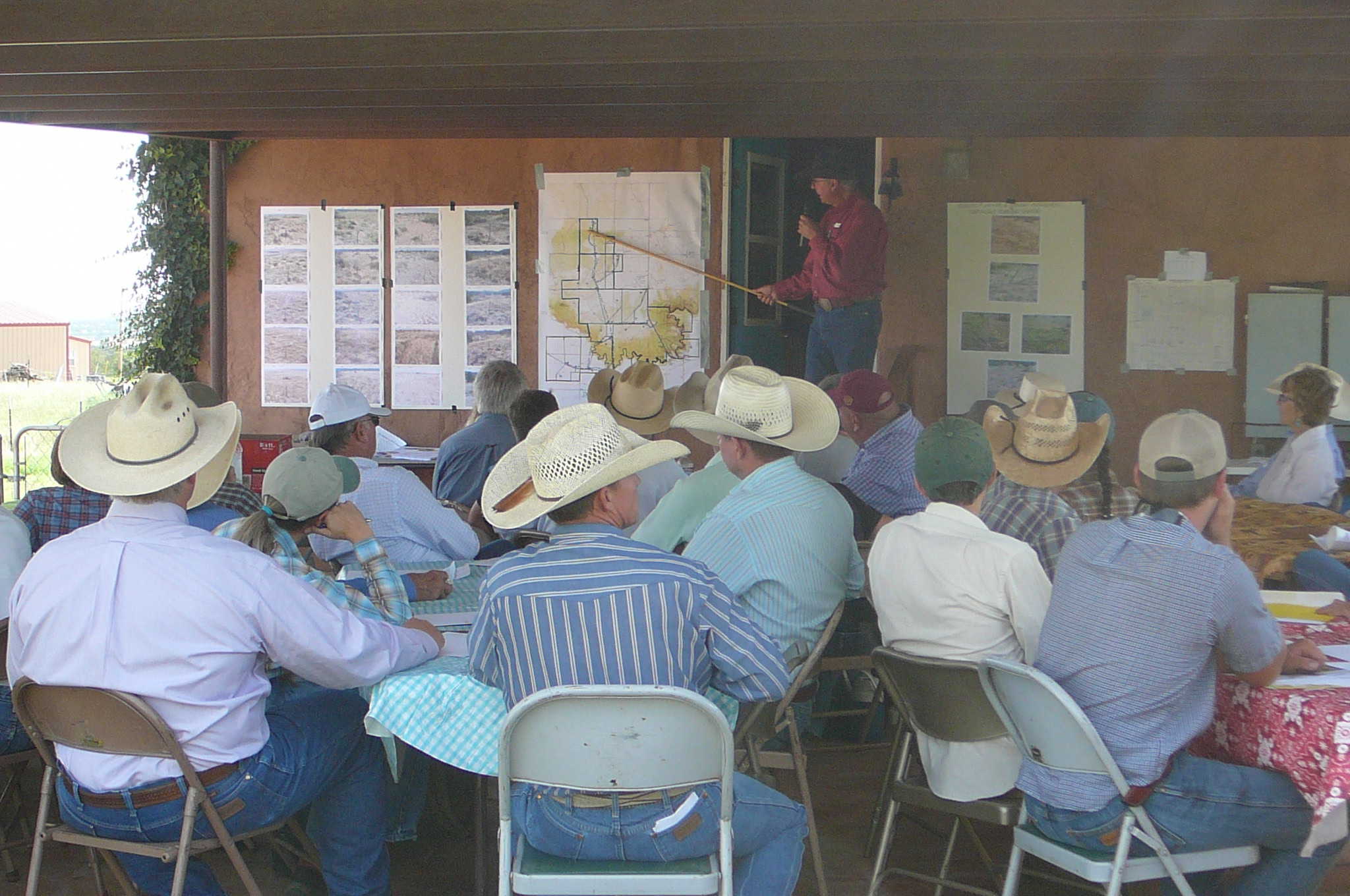 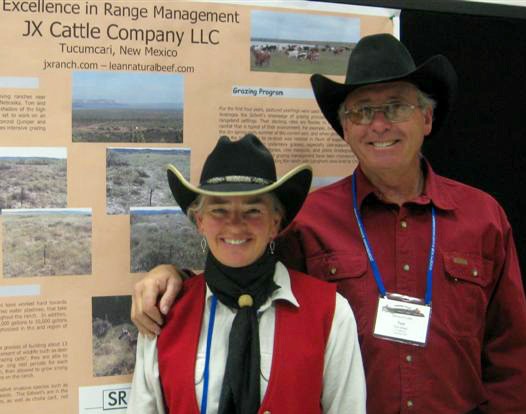